“We are the memories we don’t remember, which live in us, which we feel, which make us sing and dance and pray the way we do, feelings from memories that flare and bloom unexpectedly in our lives like blood through a blanket from a wound made by a bullet fired by a man shooting us in the back of our hair, for our heads, for a bounty, or just to get rid of us.”

When I get asked (which I often do) why I consider literature so important, my answer is always the same: “empathy, compassion, and understanding.” It is well documented that reading provides a type of sentimental education in which we learn, from an early age, to understand the multifaceted nature of human experience – the joy, pain, and suffering. With the political chaos currently enveloping much of the world, lessons in empathy are more necessary than ever. All books provide us with an opportunity to educate ourselves on human perspectives and experiences. It is rare, however, to find a novel that delivers this type of education with the timeliness and power of Tommy Orange’s debut work, There There.

There There details the journeys of its 12 narrators, connected through a variety of familial relationships and, more abstractly, a shared exploration of the meaning of belonging within the context of contemporary Native American communities. From the outset, it is clear that the novel’s central plot line – the upcoming Oakland Powwow and the various ways in which the characters are connected to the event – is secondary to the manner in which this tradition-centred meeting provokes a reflection on identity. Each of the characters struggles with the notion of what it means to be Native American in a society that is, for them, a product of violence, displacement, and loss. Displacement is central to the identities of the characters – some are adopted out of troubled families, others grapple with the tension of being mixed race and unsure of what it means to be Native American in this context. As Thomas Frank, a character who is both Native and white, reflects: “You’re from a people who took and took and took and took. And from a people taken. You were both and neither.” The pain of this contradiction resounds throughout the novel.

“The wound that was made when white people came and took all that they took has never healed. An unattended wound gets infected. Becomes a new kind of wound like the history of what actually happened became a new kind of history. All these stories that we haven’t been telling all this time, that we haven’t been listening to, are just part of what we need to heal. Not that we’re broken. And don’t make the mistake of calling us resilient. To not have been destroyed, to not have given up, to have survived, is no badge of honor. Would you call an attempted murder victim resilient?”

Following instances of mass atrocity, story-telling often plays a vital role in attempts to capture and reconstitute both shared and individual identity. There There centralises the importance of stories in learning to account for the ruptures that exist in the contemporary experiences of its characters. Ruptures are everywhere in this novel. They are present in the juxtaposition of Native American traditions against a contemporary backdrop. They are deep and painful in the characters attempting to unite seemingly incompatible parts of their heritage. And they are most dramatically and poignantly presented in the physical and systemic violence perpetrated against this community by history’s ‘victors’. These ruptures make There There a difficult read for anyone who is able to live with the privilege of easily accessible ignorance. This is an ignorance that Tommy Orange tackles head on in one of the novel’s most timely and powerful moments: “If you were fortunate enough to be born into a family whose ancestors benefited directly from genocide and/or slavery, maybe you think the more you don’t know, the more innocent you can stay, which is a good incentive to not find out, to not look too deep, to walk carefully around the sleeping tiger. Look no further than your last name. Follow it back and you might find your line paved with gold, or beset with traps.”

Much of There There‘s power is its fearlessness in presenting a brutally realistic portrait of “Urban Indians.” In an industry still struggling to represent the diversity of voices that it so desperately needs, this novel serves as an education in why contemporary literature must not remain parched of non-white authors. There There subverts dominant narratives of what it means to be Native American. In its powerful prelude (which, on its own, would make the novel worth reading), we are immediately forced to confront the reality of a nation’s history built on violence and genocide. Tommy Orange devotes these initial pages to the symbolism of the “Indian Head” – “Our heads are on flags, jerseys, and coins. Our heads were on the penny first, of course, the Indian cent, and then on the buffalo nickel, both before we could even vote as a people – which, like the truth of what happened in history all over the world, and like all that spilled blood from the slaughter, are now out of circulation.” Native American history has been fetishised by a society that is determined to misremember its own culpability. This is the privilege of victory.

“They took everything and ground it down to dust as fine as gunpowder, they fired their guns into the air in victory and the strays flew out into the nothingness of histories written wrong and meant to be forgotten. Stray bullets and consequences are landing on our unsuspecting bodies even now.”

Stylistically, Tommy Orange has chosen the perfect method to convey the realities of experience as a contemporary Native American. Telling the story through 12 narrators, with diverse voices and struggles, perfectly captures the contradiction that Orange wants to level against society’s retelling of history and the Native American’s modern experience. As Orange has himself described in interview, “There’s a monolithic version of what a Native is supposed to look like. If we all have to be historical, with a headdress, looking off into the distance, that’s hopeless as far as building a proper, complex, human identity.” I did find that, with so many narrators, the pace of the novel suffered in some sections. This was in part to do with my own struggles attempting to keep track of the various relationships and connections – which, at times, distracted from the plot – but was also a product of some characters simply having a stronger presence. However, There There achieves so much in its 290 pages that any confusion regarding character relationships feels almost purposeful. These characters are, after all, attempting to configure and understand their own identities against a backdrop of shared history and trauma. It feels appropriate that the reader should have a part in this process.

To say that There There is one of the most important books of 2018 would, I think, be dramatically underselling its power. I have spent over a decade studying and working in human rights, with a specific emphasis on genocide and mass atrocity. I wasn’t drawn to Tommy Orange’s debut work for that reason, but rather as an attempt to educate myself more fully on a community about which I have so little knowledge. I’m not an American and I have the privilege of viewing America’s history with its indigenous population as an outsider. However, I am also keenly aware of a global movement that looks toward ignorance and innocence, in the place of admission and reconciliation. These are big words with big meanings, but the first step is simple – education. Education on difference, commonality, objective history and experience are prerequisites to building the kind of shared understanding necessary to move forward. Novels such as There There are integral to this process, asking us to confront uncomfortable truths and provide space for the stories that were never ours to tell.

“Something about it will all make sense. The bullets have been coming from miles. Years. Their sound will break the water in our bodies, tear sound itself, rip our lives in half. The tragedy of it all will be unspeakable, the fact we’ve been fighting for decades to be recognized as a present-tense people, modern and relevant, alive, only to die in the grass wearing feathers.” 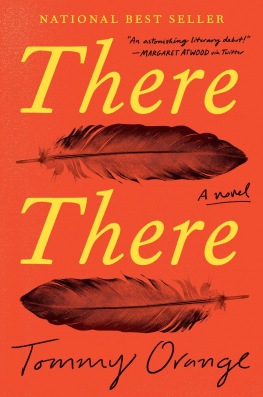 8 thoughts on “Review: ‘There There’ by Tommy Orange”